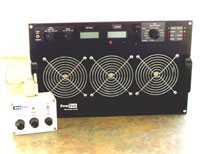 This particular Load has been designed to operate with Telecom 110V Rectifiers and
Power Supplies with output Voltages in the range of 100V to 135V and is extremely
cost effective.

The load is continuously rated at 90 Amps at up to 135V DC, i.e. 12kW. The standard
model comes with Constant Current and Options for Constant Power, Constant Resistance and
Constant Voltage modes. The mode selection will be via the front panel. The load
current is continuously variable over the entire current range. The current is controlled
via two knobs on the front panel, one coarse and one fine control.

The Load is powered from the mains supply. The unit uses forced air cooling. The
Load is housed in a 6U case with an option for 19 inch Rack Mount case. It can also be used as a portable Load.

The case has various rear panel connectors and the front panel has two LCD digital
panel meters, one for the DC input Voltage and one for the load current. There are
also eight LED’s to indicate the status of the Load.

The load has been designed to be very reliable and easy to use. It is thermally safe and
has fan fail detectors on all fans together with air blockage detectors. The DC input
has overvoltage protection included. The DC power connection is via an Anderson SB
® Series connector on the rear panel. Monitor points are included on the front panel
for access to the internal shunt. This is also provided via a D type connector on the
rear panel.

Control selection is made from the front panel between “Load ON”, “Load OFF”,
“Data Logger Control”, “External Input Control”, (e.g. suitable for UPS control).

The rear panel has a connector to link to the “Manatronics Data Logger DLM-09” or
for an external load on / off control, (e.g. suitable for UPS control).

If this unit is also required to carry out Battery Discharge testing there is an option to
have an in-built LVD, (Low Voltage Disconnect). This can be enabled and disabled
from the front panel. It is possible to select the “End Voltage” for both 48V and 50V
systems with an equivalent “End Voltage” per cell from 1.55V PC up to 1.90V PC.
When enabled the load monitors the overall battery Voltage and when it drops to the
“End Voltage” it will automatically disconnect the load and the current will drop to
zero. Thus, the Load now becomes an intelligent Load, in that if it is left unattended it
will prevent deep discharge of the batteries and hence prevent any possible damage to
them.

When this load is used in conjunction with the “Manatronics Data Logger DLM-09”,
(which is recommended), the “End Voltage” will be programmed from the Logger and
this will automatically disconnect the load when the Logger senses that the “End
Voltage” has been reached. This feature will override the LVD in the load.